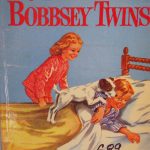 I became an avid reader at the age of eight. And I remember the book that triggered my lifelong passion for reading.

The book was one of the Bobbsey Twins titles, an American children’s book series by Laura Lee Hope, My family was living overseas at that time and English children’s books were rare indeed. My Dad, away at a conference had found and bought this book back home for me. I was thrilled. A hardback book with a coloured paper jacket. I could hardly believe that I was now actually the owner of a real book.

That night the bedtime routine was the same as usual. A wash, PJ’s and into bed for storytime. My younger brother and I were allowed one sugared almond from Dad’s ornate music box. The two big nightly choices, a pink or a white sugared almond and what story we wanted read to usnight was a bit different. This time my Dad handed me my new book and asked me to read the first chapter to him and my brother.

I felt so proud of myself. I could manage most of the words as I was swept up by the adventures of these two sets of  twins, Nan and Bert were older than me, but I was older than Freddie and Flossie.

I managed most of if, stumbling over some new words with the occasional help from my Dad. Then after finishing, brushing our teeth, it was time for the light to go out. But there was no way I could sleep. My imagination had been captured and I couldn’t fall asleep like my brother. I lay in bed trying to imagine what would happen next.

It was too much for me. I had to find out. After a while I heard my parents go to their room and close the door. I sneaked off to the kitchen and took the torch from its resting place on the shelf. I tiptoed back to bed.

Safely under the bed covers, book and torch in hand I turned the torch on. Yes, now I could read! Yes, there were some words I didn’t know, but I discovered that if I read the next sentence   I would usually know or imagine what that word meant.

So I ploughed on, all through the night, totally engrossed in the Bobbsey twins adventures. Finally I got to the end. I had read the whole book in one night, for by now the sky was a pale pink and the birds had begun to sing.

The only downside? For several more nights I had to read a chapter a night to my Dad, pretending. that I didn’t know the ending. I couldn’t admit that I had cheated by reading the book all in one go.

That night I had discovered the power of the storyteller. That was the night I decided to become a lifelong reader.

So, what triggered a reading habit for you?